It is 75 years since the celebrated author Dorothy L Sayers and her husband Mac Fleming came to Galloway. They first stayed at the Anwoth Hotel in Gatehouse of Fleet in 1928 and from 1929 rented a studio in The High Street, Kirkcudbright next door to the well-known artist Charles Oppenheimer. They got to know Galloway well, especially the artistic community in Kirkcudbright and Gatehouse, on which her detective novel The Five Red Herrings is based. 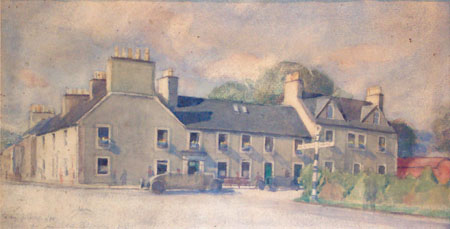 The Five Red Herrings, was published in 1931 and is dedicated to Joe Dignam, owner of the Anwoth Hotel. It has continued to remain in print ever since. Hodder and Stoughton published a brand new edition in October 2004. Featuring Dorothy L Sayers’ famous detective, Lord Peter Wimsey, the novel is set largely in Gatehouse and Kirkcudbright. It involves the murder of a local artist, with the body being found in the Minnoch by Borgan near Bagrennan.

At the beginning of the story we find Wimsey enjoying the simple life in Kirkcudbright, living down the Bluegate close, a thinly veiled Greengate, the home of Jessie M King and E A Taylor, when he hears of the death of one of the characters an artist Campbell, who lives at Gatehouse. Wimsey becomes involved in the search for the murderer among the six most likely suspects, all artists, supposedly living in Kirkcudbright or Gatehouse.

In the preface to the novel the author states: “All the places are real places, all the trains are real trains and all the landscapes are correct, except that I have run up a few new houses here and there.” In October 2004 The Stewartry Museum in Kirkcudbright and the Mill on the Fleet in Gatehouse of Fleet put on exhibitions in both towns linking the places described in the book with paintings of the same locations by the artists, who knew Dorothy and Mac here in Galloway. This provided a rare opportunity to see fine works by artists such as Charles Oppenheimer, E A Taylor, David Sassoon, Hamish Paterson, A R Sturrock and Chris Ferguson, some not seen in public before. The exhibition featured many of the places mentioned in the book including The Clints of Dromore, the strange Japanese beauty of Mossyard, the Anwoth Hotel, Carrick and Kirkcudbright.

The organisers are compiling a booklet based on the material collected for the exhibition. While they have collected a lot of information they would particularly welcome information about places and people mentioned in the book. If you have any information please contact This email address is being protected from spambots. You need JavaScript enabled to view it.

A booklet on the crime writer, Dorothy L. Sayers, and her connections with Galloway is available from The Stewartry Museum, Kirkcudbright, produced in collaboration with the Gatehouse Development Initiative.

Entitled ‘Dorothy L. Sayers in Galloway’ the 24 page booklet has been written by Christopher Dean, Chairman of the Dorothy L. Sayers Society and is richly illustrated with images of people and places associated with the author's time in Gatehouse and Kirkcudbright.  The publication is based on the lecture Christopher Dean gave in the Mill on the Fleet last year as part of the events which marked the re-publication of Sayers’ novel ‘The Five Red Herrings’ which was set in the artistic community of Gatehouse of Fleet and Kirkcudbright in the late 1920s. Sayers was introduced to this area by her husband, Mac Fleming, who was a competent amateur artist and friends with several artists resident in this area. They had regular holidays here, particularly to the Anwoth Hotel, Gatehouse of Fleet, where Sayers wrote ‘The Five Red Herrings' – a Lord Peter Wimsey murder story, set in the artistic communities of the two towns. Although none of her fictional characters were based on any one artist, it is quite clear that aspects of some of the characters were based on those she knew.

The publication of the book has been supported by the ‘Awards for All’ scheme operated by the Heritage Lottery Fund, with other contributions from local organisations. The booklet, priced £3.00, is available from The Stewartry Museum and Tolbooth Art Centre, Kirkcudbright, and local bookshops. 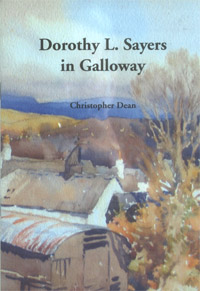 See also: Artists Footsteps - a website featuring the work of Dumfries and Galloway artists of the past. 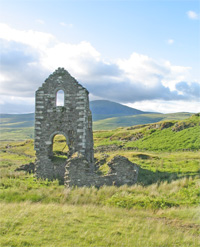 The Pibble Mine ruins in the hills above Gatehouse.

Artist Hamish Paterson in his Austin 7 outside the Anwoth in 1930.  In the big Buick alongside is the daughter of one of the owners of the Bobbin Mill.
Below is a reconstruction taken during a vintage car rally as part of the celebrations.

In October 2004 The Stewartry Museum in Kirkcudbright and the Mill on the Fleet in Gatehouse of Fleet put on exhibitions in both towns linking the places described in the book with paintings of the same locations by the artists, who knew Dorothy and Mac here in Galloway.  A selection of paintings from the show is provided here.