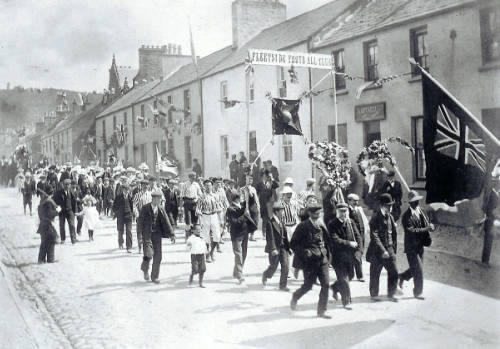 Although the town only dates back to the 1760s, the area around Gatehouse of Fleet has been inhabited since pre-history.

Nearby Neolithic and Bronze Age antiquities include the chambered cairns at Cairnholy and Trusty's Hill fort with its Pictish stone carvings, known as the De'il's Specs (Devil's Spectacles).

Cardoness Castle, the 15th century tower of the McCullochs, keeps watch over the Fleet estuary, while the roofless old kirk at Anwoth yields fascinating insights into Scotland's turbulent religious past.

Gatehouse owes its development to the entrepreneur James Murray of Broughton, whose great house, Cally - now a high class hotel - was completed in 1765. The original Gait House was simply a staging post on the important route to Portpatrick and Ireland, but from 1760-1850 the town grew into a thriving centre.

Today it is hard to imagine that Gatehouse was once known as "the Glasgow of the South" but traces of its industrial past remain in its buildings and street names.

The Mill on the Fleet was one of the factories built by the Birtwhistle family from Yorkshire, and its water-wheel is driven by the eastern lade that flows behind the High Street houses.

The Mill on the Fleet is host to events throughout the year ranging from local acts to international artists. For further information, click here.

Port Macadam, once the town's harbour, lies on the stretch of the Fleet that was canalised in 1824, and used to receive up to 150 ships a year.