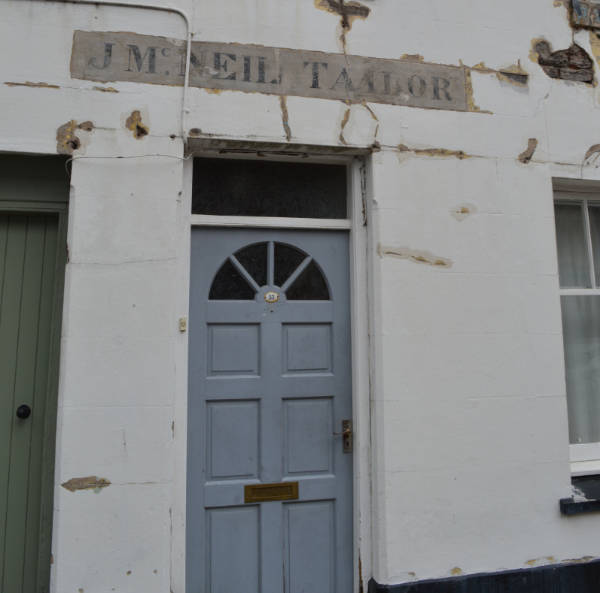 Sadly the Covid pandemic has curtailed research on J McNeil  but there have been interesting developments.  At the time of the 1841 census, timber merchant Rodney McNeil was living in Back Street, Gatehouse with his six sons. His wife Mary Watt, daughter of Andrew Watt, had died earlier that year. Andrew Watt was a lint miller in Skyreburn but also owned number 17 High Street, Gatehouse.  Rodney and Mary’s second eldest son was James, born in 1830.  The McNeils owned the house which today is 21 Catherine Street.  However, the house was sold in 1842 and in that year a Rodney McNeil married in the Isle of Man. It is difficult to search Isle of Man records online so we do not yet know what happened to Rodney.  But what happened to his children?

Thanks to the dedication of family history researchers using the internet, we find our James aged 21 working as a tailor in Preston at the time of the 1851 census lodging with a tailor called John Green. Could more research on the whereabouts of his brothers help to explain why he became a tailor in Preston? In 1852 the register of marriages for the parish of Borgue records that James McNeil, residing in Preston, married Agnes Gordon belonging to Borgue.  Could James have set himself up as a tailor in Gatehouse?  At the time of the 1861 census he was living in Preston with his wife Agnes and five children and was described as a tailor (foreman).  At the time of the 1871 census James, a widower, described as a tailor and draper was living at 119 Church Street with his 7 children.  Number 118 was occupied by a 53 year old widow, Margaret Brandreth carrying on a business as a pawn broker.

Margaret Brandreth was, like James McNeil a grandchild of Andrew Watt, the Skyreburn miller and in 1867 she inherited number 17 Fleet Street, Gatehouse.  Margaret was also the sister of George Darling Watt the first British Mormon, who went on to become secretary to the Mormon leader Brigham Young.

When James died in 1876 his will was proved by his brothers John and Andrew.  Andrew was also a tailor and was living at 8 Deepdale Terrace, Preston.  At that time Margaret Brandreth was living at 6 Deepdale Terrace.  So, it seems there was a close tie between the McNeils and Margaret Brandreth and the likely reason that they came to Preston but we still don’t know why James became a tailor and whether he was the J McNeil, tailor in Gatehouse.  Hopefully, further research including a visit to Preston will provide more definitive answers.