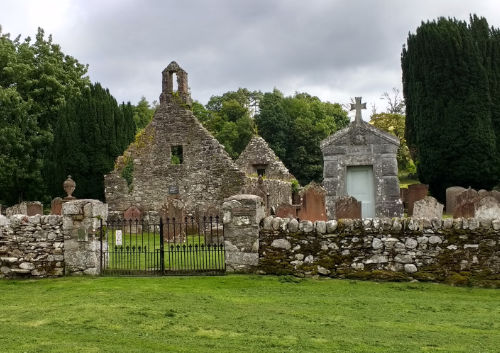 The roofless shell of the old parish church of Anwoth, built about 1626.  It was the church of the celebrated theologian Samuel Rutherford minister from 1627-1639 and later Professor of Divinity at the University of St Andrew and Principal of St Mary’s College.

Samuel Rutherford was a major figure of 17th century Scotland, who is still relevant to us today.  In 1842 a monument was raised to him on the hill above the town - more on this here.  In the churchyard is a monument erected to John Bell of Whiteside, a covenanter shot in 1685.  The church was dismantled in 1826 when the new church along the road from it was completed.  The ruined church along with the 'Old Schoolhouse' opposite featured in the cult film 'The Wickerman' which was filmed locally.