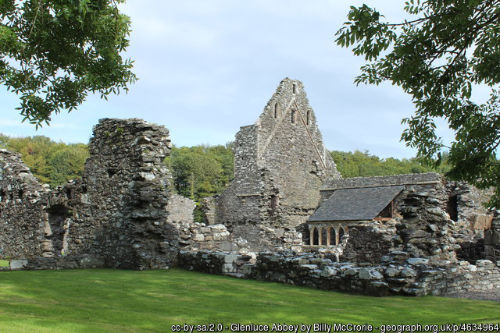 About 30 miles west of Gatehouse near the village of Glenluce are the ruins of the Cistercian abbey of Glenluce founded from Dundrennan Abbey in 1191.  Beyond surviving foundations which clearly show the layout of the complex not much remains of the structure save for the imposing gable of the south transept adjoining the remains of the east range of the cloister.  The main feature of this range is the surviving 15th century chapter house, the vault springing from a central pillar.  The other notable feature is the surviving jointed water supply pipes complete with lidded junction boxes.