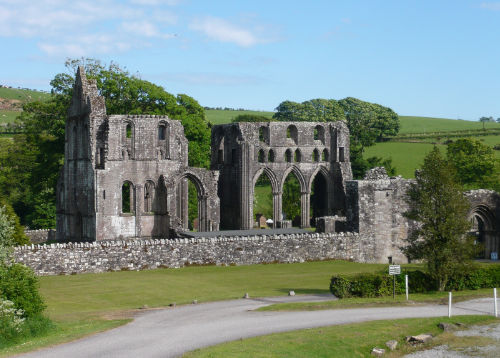 The romantic ruins of this 12th century Cistercian abbey are in the village of Dundrennan about 14 miles from Gatehouse via Kirkcudbright.  The abbey was founded in the mid-12th century from its mother house, Rievaulx Abbey, in Yorkshire.  The layout of the church and claustral buildings can be seen, but it is only really the crossing and chancel of the church that remain to full height.

They are a particularly fine example in the region of medieval workmanship and date from the transition between romanasque rounded arches and the early gothic pointed arch.  The entrance archway into the chapter house, with windows either side, and dating from the late 13th century also survives.  In its day this must have been a very fine vaulted room.