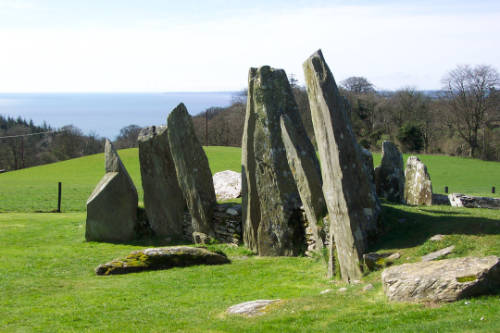 These impressive neolithic tombs were built in the 4th millennium BC. They are of a form known as Clyde Cairns, characteristic of southwest Scotland. The appearance they have today was never intended as they would both have been topped by a mound of stone which has been long since reused for field dykes and later building.

Cairn Holy I is notable for its fine curving façade of standing stones which formed a backdrop to a forecourt in front of the tomb which may have been used for cereminial purposes and excavations indicate fires were lit here.

Legend has it that this is the tomb of Galdus, a mythical Scottish king. The tomb is much older than this - but may have been reused for later burials.